Firstly, as you can see we've started recording the changes to the website here.

With our first blog provider shutting down and our second being bought by Yahoo we thought it was time to bring this in house.

With that out of the way, here's a rundown on what's changed in this build.

One of the biggest changes this time is not something new, but something that's been removed.

Ever since we first released the website we tried to differentiate between two terms; games and matches.

For example your “game” might be every thursday at 6pm, which meant your next 2 “matches” would be Thu, 19th May and Thu, 26th May.

We thought it was an important difference that mattered, but the last few years has taught us people find it all a bit confusing (and understandably so).

From today “game” and “match” mean much the same thing. You'll now find a new icon on match menu for editing your match template.

Your match template lets you change all the settings for your matches.

Players can see much more of what's going on, including: 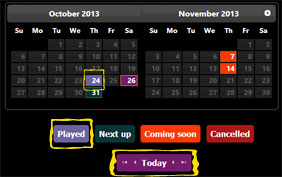 We've always kept a history of matches that have been played (about 3 months worth).

These past matches have been opened and you'll be able to see who played and where, etc. Of course we need a way of being able to get to the matches that have gone:

As you can see the diary has been enhanced to show past matches.

Diary feature is not available on mobile devices, sorry.

As a result they'll be lots more matches listed in the diary view so we've added a small widget to move around each match.

Diary feature is not available on mobile devices, sorry.

We've had avatars in toepoke for ages! So why are we going on about them now?

If you don't have an avatar setup, we'll generate a unique Monster for you, rather than the default toepoke avatar. 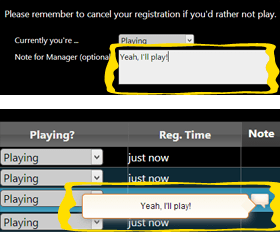 We've done a sweep of the website, adding the ability to write notes where we think it would be useful:

We built toepoke to give you the best chance of having your match go ahead, with everyone turning up and have a great time. One of the ways we do this is by telling you what's happening through the week.

We've had feedback that it e-mails you a bit too much, so we've added an e-mail preferences setting you can tweak.

There are 3 settings; All, some and none.

We've also made lots of little changes you may not immediately notice, like ...